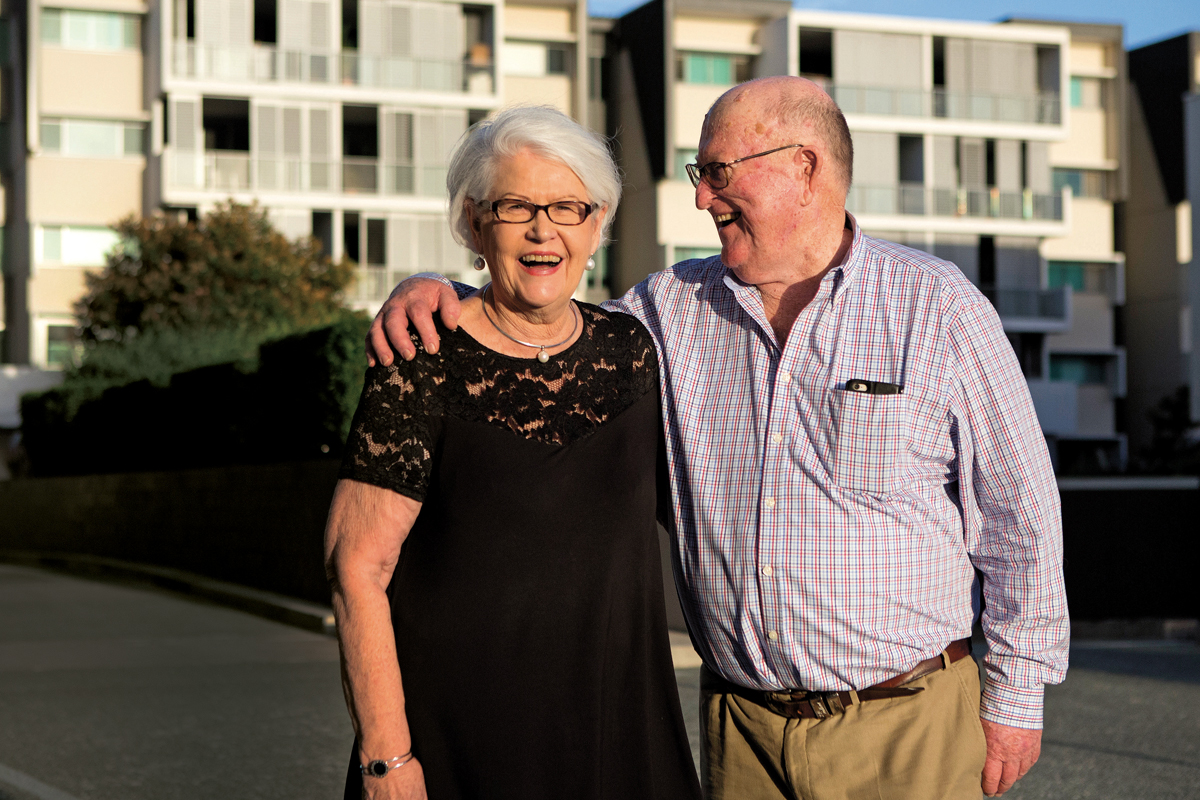 That’s how old (young) Clinton Condon is but his “much younger” wife, Lorraine, is just 74. “Every year she tries to catch up to me but I’m too fast for her,” he reveals with a gleeful chuckle.

To describe this retiree as aging gracefully is an understatement. It would be hard to find a more exuberant conversationalist of any age. Some of that good humour can be attributed to the couple’s recent move from the Gold Coast to The Village at Yeronga in Brisbane’s south.

“We’ve only been here six months but I feel totally at home already,” Clinton says. “The sense of community is much stronger than I expected.”

Part of that is due to village management, Clinton says. “The staff are excellent. Our place wasn’t built yet when we bought it but they invited us to lunch a few times so we could get to know some of our neighbours before we moved in.”

That level of caring made settling in very easy, Clinton says. “The village is privately owned and they take notice of you. The owners cooked us a barbecue recently and mixed with everyone afterward. There’s a real family feel here.”

More daunting than logistics of moving for Clinton was the challenge of finding his place in a new community. He says he was initially reluctant to move into a retirement village fearing that it might be “full of sour old buggers”.

“The people are lovely. Our neighbours welcomed us with a homemade slice when we moved in so I returned the favour and baked them some meat pies.”

Its convivial atmosphere lends The Village at Yeronga a holiday feel, he says. “For 30 odd years, we had a caravan. We went camping every Easter. Caravan people all have something in common: they love to have a drink and a chat in the evening. It’s like that here.”

Originally from Dalby in the Western Downs, Clinton maintains strong ties to the bush. The freedom to travel at a moment’s notice is one of the attractions of village living, he says. “I’ve still got a lot of friends in the bush and we like to travel to see them.” With the gardening and general maintenance taken care of, “we can just shut the door and go whenever we please,” Clinton says.

Security is another benefit. “Loraine goes to the pool at 5 in the morning and she walks around without worrying,” he says. “It’s very safe and peaceful here. You never hear of any trouble.”

With the CBD just five kilometres away, residents have ready access to the best of city living but the Village at Yeronga offers a huge range of services and amenities on-site.

The village restaurant and cafe are very good. Clinton says, and the many facilities ensure that there’s more than enough for them to do — or not — as they feel. “Loraine does a lot at the village, handicrafts especially, but there are groups for everything here, even line dancing. Not me though, I always say: I’m a lover, not a dancer!”

Movies are Clinton’s entertainment of choice and he’s well catered for. “They’ve got a cinema here with about 1000 films to watch,” he says. “There’s every kind you could want.”

Add in the on-site health and beauty services and there’s not much reason to leave the village, Clinton says.

For those weighing up their retirement living options, Clinton advises taking your time to thoroughly investigate a village before making your decision. “Talk to the staff and residents. It will give you an idea of how welcoming they are. As you walk into the office, does everyone say g’day to you? Walk around and look at the facilities: are they well organised, well maintained? Look at the services: are they what you want, what you need?”

“We looked into every retirement place around but we didn’t consider buying until we saw this one. It just suited us perfectly.”

If you are ready to make the shift and take your retirement from good to great,
call Kath on 3892 5454 to arrange a personalised tour of The Village at Yeronga, or explore our other Brisbane and Toowoomba locations here.